Build your financial security with OBT Financial Group – Lockyer Valley’s Business of the Year 2015 and specialist financial advisers to individuals, business owners and farming families on accounting, tax, business advice and wealth planning for over 30 years.

How would the US market have performed without Big Tech? How do their profits compare?

Our charts reveal the market dominance of the “FAMAGs”.

The largest US technology stocks – Apple, Microsoft, Amazon, Facebook and Google (Alphabet) – known as the “FAMAGs”, tumbled sharply at the beginning of this month, after supercharging the US stock market from the depths of the Covidpandemic in March.

These “superstar” firms have largely benefitted from the economic fallout of the crisis, as more people rely on their technology to work and shop from home. However, their increasing dominance is raising concerns about the top-heavy composition of the US equity market and the sustainability of the tech rally.

Here are five charts that demonstrate the FAMAGs’ growing size and influence.

1. How Big Tech is propping up stock market returns

With Apple briefly becoming the first US company to be valued at US$2 trillion, more investors are turning their attention towards the impact of the tech sector on market returns.

If we exclude the tech giants, the index return drops to -2%. In other words, US equities would be 8% lower this year without the FAMAGs (or 11% when measured at their peak on 2 September). This is how important these firms have become. 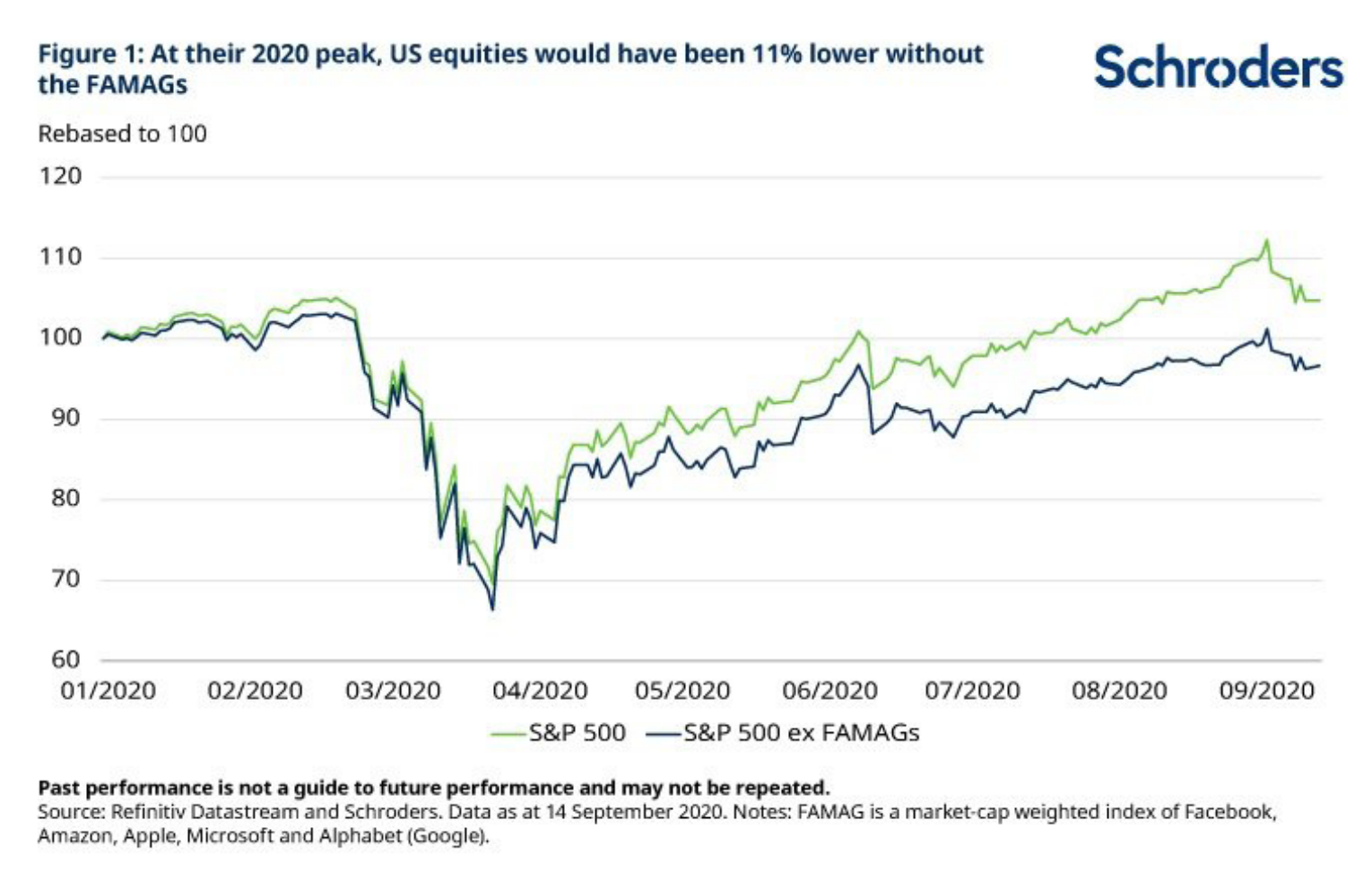 2. The US market is increasingly concentrated

One reason why these firms have become so influential is because they are the most heavily weighted stocks in the index.

Investors’ rush into tech this year has propelled the weight of the FAMAGs in the S&P 500 Index to a record high of 25%, more than double their weight from five years ago. 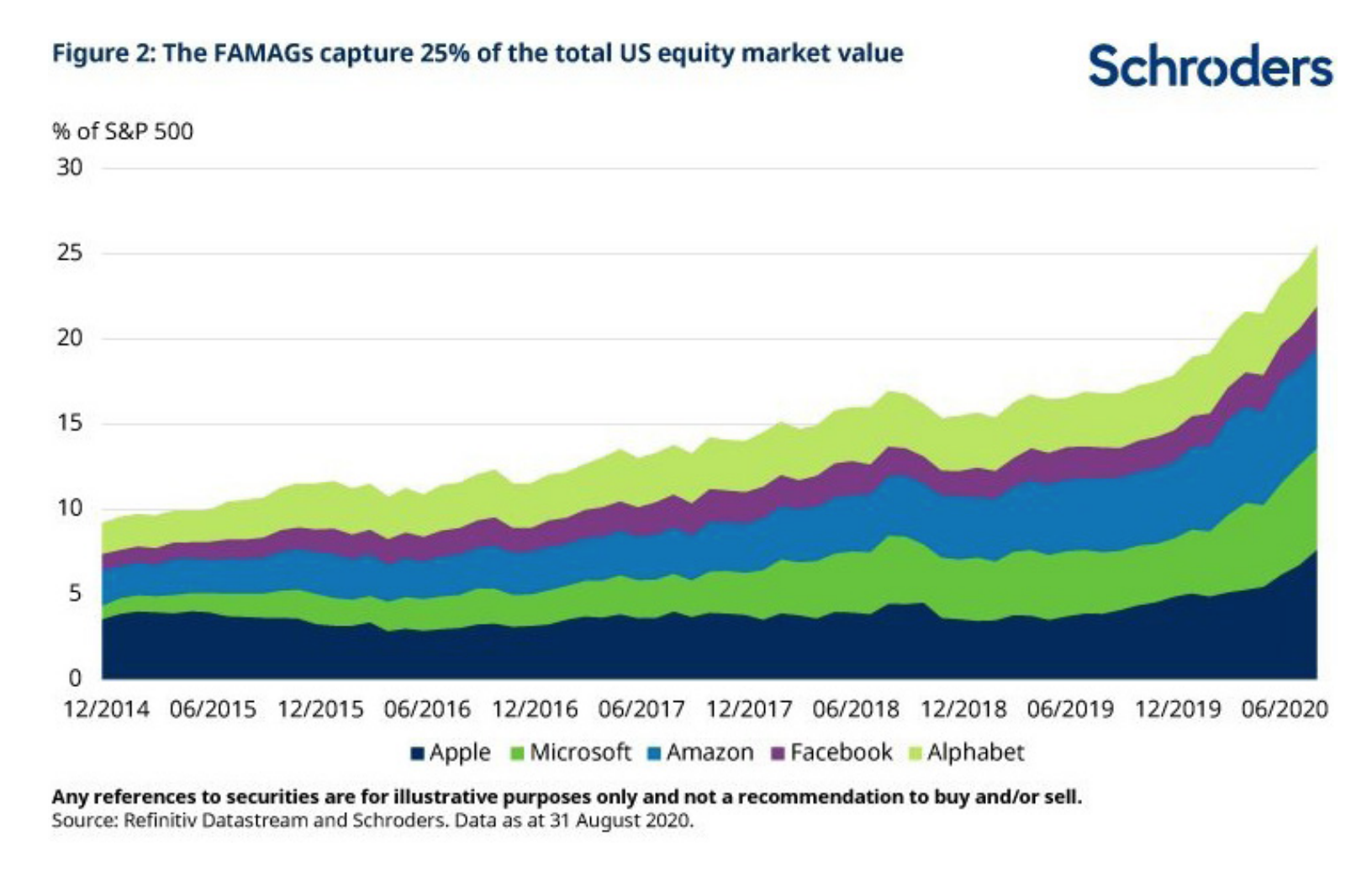 To illustrate this, let’s suppose hypothetically that the FAMAGs collectively fell by 10%. That would mean that all remaining 495 stocks in the S&P 500 would need to increase by at least 3.3% just for the whole index level to stay the same. 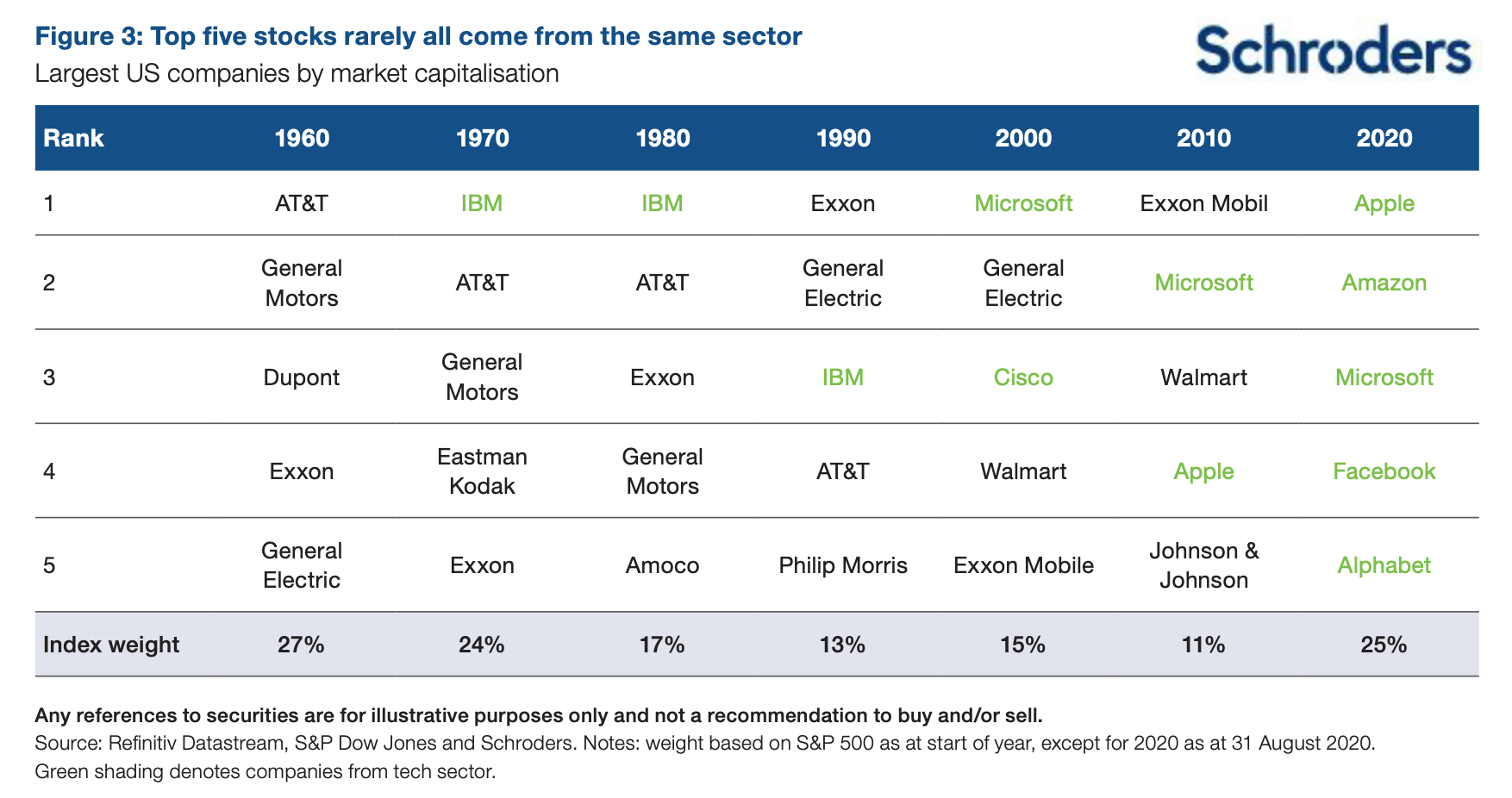 3. Unprecedented dominance of a single sector

The five largest members of the S&P 500 are now all from the tech sector. The last time the US equity market was as concentrated as this was back in the late 1960s. So it is not unusual for the market to be concentrated in a handful of stocks (see table). Although the extent of concentration at present is greater than normal, what is more unusual is for the top five stocks to be all from the same sector – tech.

This lack of sector diversification should not be taken lightly. Any pullback in tech sentiment can have an outsized impact on overall market moves, as was recently the case.

So are stock market valuations ringing alarm bells? This is the question that confronted investors at the height of the dotcom bubble in 1999 before it burst.

However, comparisons between the 1999 dotcom and today are often oversimplified. They often ignore the fact that many of the fast-growing internet companies back then were not generating significant profits or cash flows.

In contrast, the current tech giants are highly profitable. They account for 15% of trailing 12-month S&P 500 earnings and an even higher proportion of forecast earnings, e.g. 20% of projected 2023 earnings. When benchmarked against their market cap weight of 23%, which reflects all future earnings, their valuations no longer look as extreme. 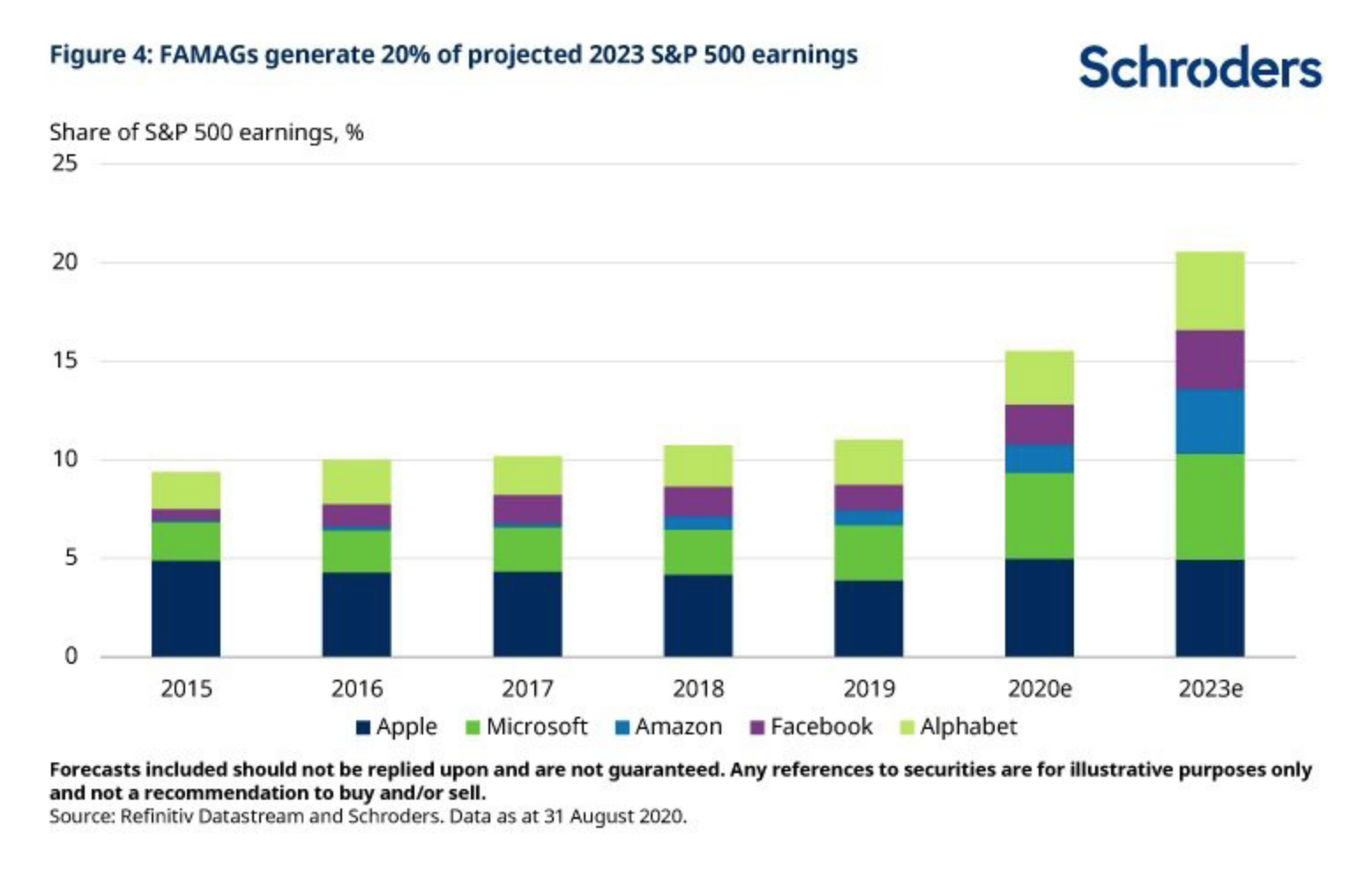 5. Big Tech has ramped up its political presence to protect its business interests

Faced with the threat of regulatory action to limit their market dominance, Amazon, Facebook, Apple and Alphabet’s Google are spending millions of dollars each year trying to influence regulators and politicians on policy issues ranging from data privacy to taxes.

For example, according to the Centre for Responsive Politics, Amazon and Facebook spent a record $17 million each in 2019. This was more than any other US company. This is not just a tech phenomenon, however. Academic studies show that corporate lobbying has been a key explanation for the decline in competition across numerous US industries.

In a recent Bloomberg interview, the chairman of the US House Antitrust panel, which is leading investigations into Amazon, Facebook, Apple and Alphabet’s Google, stated that these firms were abusing their market power to maintain their industry dominance. The chairman was critical of the government’s track record on policing anti-competitive behaviour, such as Facebook’s acquisition of Instagram. 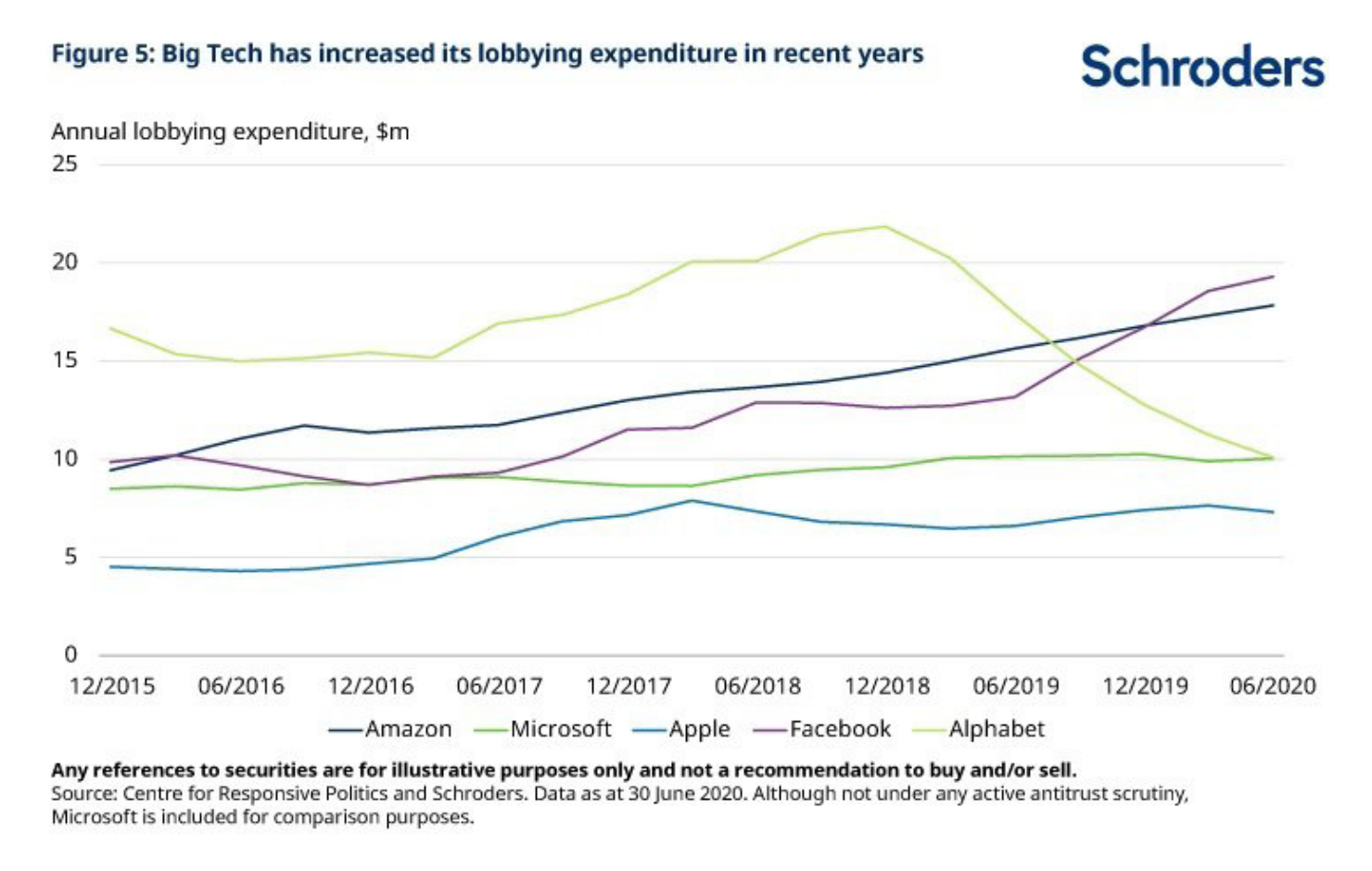 Investors should stay on guard if decisive regulatory action is taken against the tech giants. Given their high benchmark weights, it could drag returns for the overall US market lower if confidence in them deteriorates for any reason. The closer a portfolio’s weights are to the benchmark, the bigger this risk. Passive strategies are most exposed.

Any references to stocks/companies are for illustrative purposes only and not a recommendation to buy and/ or sell. Reliance should not be placed on any views or information in the material when taking individual investment and/or strategic decisions. If you are unsure as to the suitability of any investment speak to an independent financial adviser. The value of investments and the income from them may go down as well as up and investors may not get back the amounts originally invested.

Because of the in-depth way in which we work with business owners, we only take on a select number of clients allowing us to concentrate on the following six business conditions:

Call us to see how OBT Accounting & Tax can help your business. Or, to find out more about how OBT helps businesses, read our client case studies and our client testimonials.