Build your financial security with OBT Financial Group – Lockyer Valley’s Business of the Year 2015 and specialist financial advisers to individuals, business owners and farming families on accounting, tax, business advice and wealth planning for over 30 years.

When will growth return?

COVID-19 has forced economists to become students of virology.

“The virus is the economy,” says Capital Group U.S. economist Jared Franz. “All economic growth forecasts depend on the trajectory of the virus — whether it gets better or worse, whether we can develop an effective vaccine and whether government stimulus measures will continue to help bridge the income gap for workers who have been displaced by this unprecedented downturn.”

So when is growth likely to return to pre-pandemic levels? By the middle of 2021, Franz expects the U.S. economy to grow at an annualised rate of roughly 2% to 3%, fuelled by pent-up demand from months of sheltering in place, as well as the growing likelihood of a pandemic-ending vaccine becoming available to the public.

Due to the high level of uncertainty, Capital Group’s economic team has put together a scenario analysis of V-shaped, U-shaped and W-shaped economic recoveries. However, the authors suggested “K-shaped” – or moving in two different directions – might be appropriate, as well, given the disparity between sectors that have benefited from the pandemic and those that have been crushed by it.

Winners and losers in the COVID economic downturn 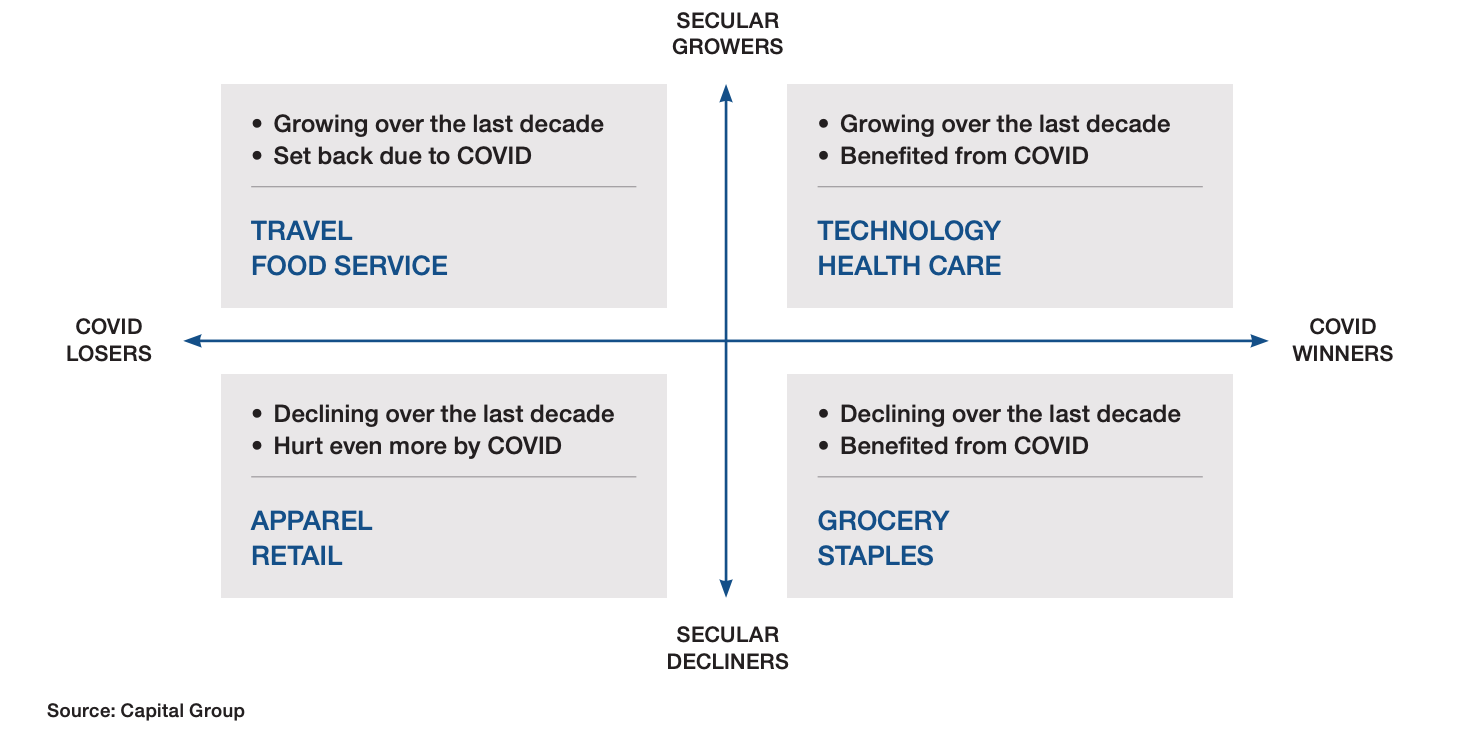 COVID causing a great divide in the US economy 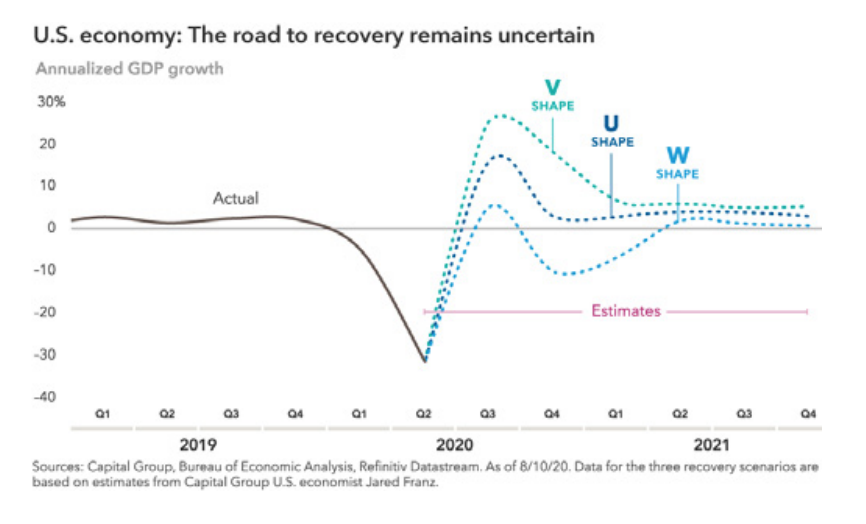 One perplexing element of the 2020 downturn is how uneven it’s been. For some areas of the U.S. economy, it has reached Depression-era levels: restaurants, hotels, retailers, airlines and, perhaps the hardest hit of all, thousands of small businesses that have closed and may never come back. But for others, it has been quite literally the best of times: e-commerce, cloud computing, video streaming and home improvement stores have skyrocketed in the stay-at-home era.

The same can be said for high-wage workers versus low-wage workers. From a job loss perspective, the 2020 downturn has been much more severe for workers earning less than $27,000 a year – many of who cannot work from home – compared to those making $60,000 or more. This disparity, of course, raises societal questions with no easy answer.

“The post-pandemic U.S. economy is probably going to be very different than the economy we had in February 2020,” the author says. “It’s going to be more efficient and more dynamic than before, but there will be winners and losers. Historically speaking, we have not done a good job of addressing the societal problems that arise from such disparate outcomes.”

Expect a grinding recovery near term

Economists have also looked at the risks to a near-term recovery. What if we don’t get a vaccine right away? What if the federal government cannot agree on a new stimulus package? What if more job losses come in the months ahead?

These fears have already been underscored by recent economic data and a series of layoff announcements from major American corporations. Personal income fell by 2.7% in August, according to the U.S. Commerce Department, largely due to reductions in enhanced unemployment benefits. Allstate, American Airlines, United Airlines and Walt Disney all announced major layoffs last week as the White House and Congressional leaders failed to reach agreement on a new stimulus bill.

“I think we are going to see more of a grinding recovery in the near term,” says Capital Group economist Darrell Spence. “Since March, we’ve done everything we needed to do except get the virus under control in a manner that lets us return to some sense of normality. Now the fiscal stimulus is running out and, if the federal government doesn’t act soon, we could be looking at a much more difficult income profile in the months ahead.”

In the second quarter of 2020 – the latest data available – the U.S. economy contracted by 31.4% on an annual basis, the biggest decline in 70 years. However, since that data reflects the worst of the downturn from April to June, the third quarter GDP reading is expected to show a dramatic bounce back as many U.S. states partially or fully reopen their economies. That report is scheduled to be released on October 29, five days before the U.S. presidential election.

With one of the hot topics this year being the Election, perceptions about the U.S. economic outlook will likely have an impact on the outcome. A recent Washington Post-ABC News poll confirmed that the economy is the most important issue to voters — more important than COVID by a 2-to-1 margin. 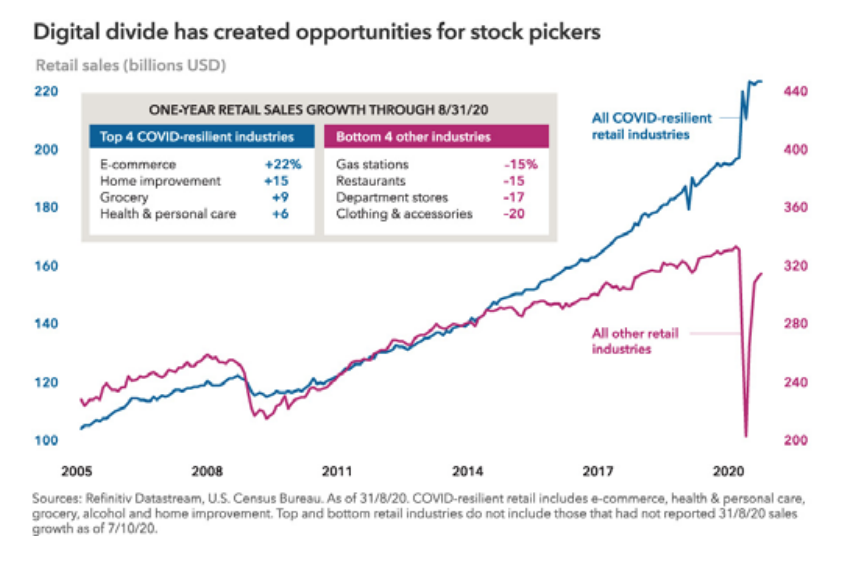 For investors, the pandemic-induced downturn has produced perhaps the biggest contrast of all. Amid the worst economic recession since the Great Depression, U.S. stock prices recovered quickly from the lows of March and hit new record highs in September.

Leading the way have been those companies with a solid “digital advantage,” including e-commerce giant Amazon, microchip maker NVIDIA and social media titan Facebook. Apple, meanwhile, became the first U.S. company in history to reach a $2 trillion valuation.

“The market is saying this has been a disastrous year, but things are going to get better,” says Capital Group portfolio manager Steve Watson. “Given the exceptional nature of 2020, I think we need to brace for more volatility ahead, but we can still find good, compelling investments for the long term.”

Because of the in-depth way in which we work with business owners, we only take on a select number of clients allowing us to concentrate on the following six business conditions:

Call us to see how OBT Accounting & Tax can help your business. Or, to find out more about how OBT helps businesses, read our client case studies and our client testimonials.